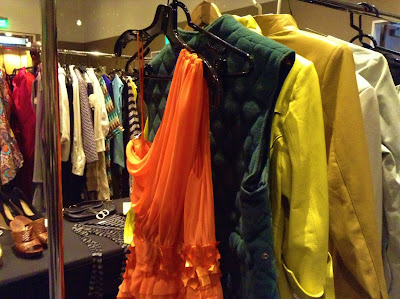 Last week I had the opportunity to attend Boldfacer's Stylemakers Pop Up Shop at the W Hotel Boston for my internship. Since much of my Thursday nights are taken up by classes, I was only able to be there for the tail end of the event, but I was still able to meet some interesting people and of course...look at beautiful clothes.

Organized by Boldfacers' founder and editor-in-chief, Lisa Pierpont, this pop up shop featured clothing from the closets of Boston's elite. Fashion designers, news reporters, and businessmen and women sold their designer pieces to shoppers for a fraction of the price and donated their profits to charity.

Email ThisBlogThis!Share to TwitterShare to FacebookShare to Pinterest
Labels: boston 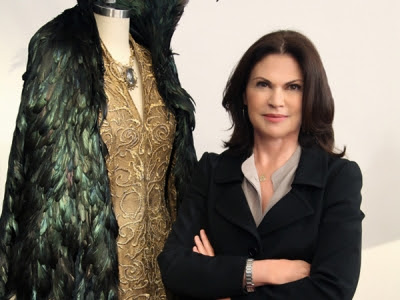 "Snow White and the Huntsman" was yet another rendition of a classic fairy tale, so not much about the movie was exceptional. There were enough twists to keep it entertaining and the special effects added intrigue, but the performances were mediocre. The real accomplishment of this movie, however, was the costume design by Colleen Atwood. She has recently been named an Academy Award nominee for Best Costume Design and there is little doubt in my mind that she won't win it. 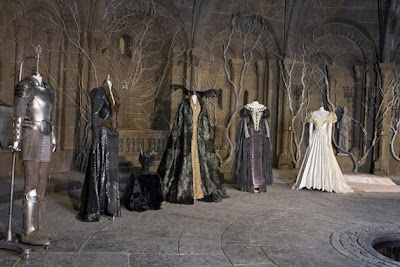 All the nominees for this award coincidentally designed for a period film, one being the much lighter take on Snow White called, "Mirror Mirror." This means they will undoubtedly be judged on accuracy for the time period, in addition to the quality of the clothes and how the designs fit the characters. But what will set the winner apart is how the designer strayed from what was expected and took a hold of their own style. 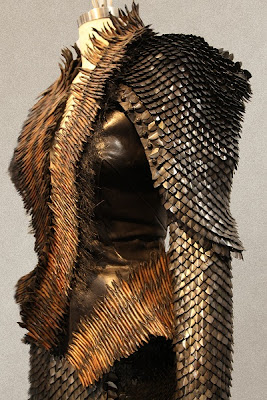 Colleen Atwood certainly accomplished this in her designs for "Snow White and the Huntsman." Her costumes for Queen Ariana alone took the movie from a typical, medieval set fairy tale to a dark, modernized battle against evil. The queen's clothing could almost be seen on royalty today because of the materials and techniques she used. One dress had a leather bodice with a peplum structured from embellishments that looked like wooden sticks, while the rest of the dress was made to look like armor with scales of metal. The wedding dress featured at the beginning of the movie had a simple corset bodice and slightly more dramatic pleated skirt, but what made it stunning were the large, intricate shoulders that looked like framework belonging to the walls of a building. A more gothic inspired, off-the-shoulder dress even has a neckline bordered with real bird skulls.  Of course, the queen's wardrobe wouldn't be complete without her now iconic feather cloak. It has a high, protruding collar, while the body of the garment has movement and body, created very thoughtfully with hundreds of feathers. 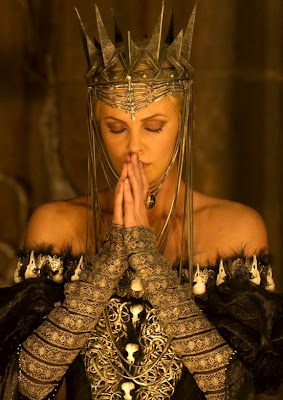 Atwood clearly used every material possible to contribute to the immense drama her costumes provided the film. Her designs were so complex I can't imagine how long they took to make, and in my opinion are no match for the other Oscar contenders. In 2010, she won the same award for her designs in Tim Burton's "Alice in Wonderland." Only having seen the movie and not knowing as much about her work, I predicted she would win the award based on the creativity and quirk of her costumes. Hopefully, she'll grab another award this year! 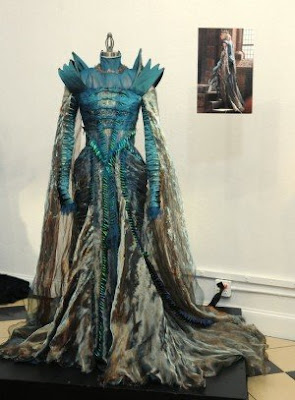 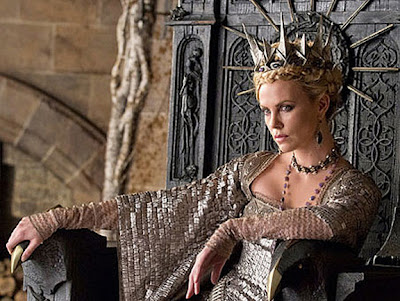 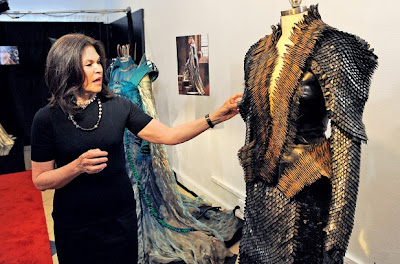 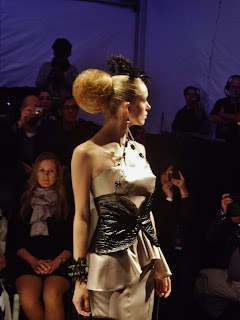 The last collection to show at Boston Fashion Week, Candice Wu's couture was my personal favorite this season. It was not only an inspiring visual experience, but the level of quality and exquisite design trumped all the shows before it. The looks were strong, structural, and edgy, using lots of black, faux leather, studs, and military elements.

Hair and makeup heightened the drama of these already showstopping looks, but the jewelry and headpieces took the show to another level. Designed by House of Cache, jewelry loaded with spikes and chains were piled on every model.

Posted by Jennifer Ortakales at 10:47 AM No comments: 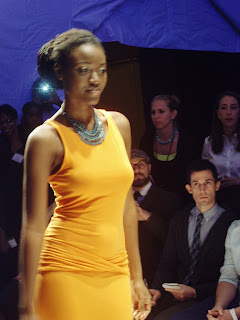 The mariavictoria show was very much a resort collection, inspired by everything a tropical vacation brings to mind. On the handout given at the show, designer Victoria Dominguez-Bagu said she used quintessential summer images of, "...mostly the sea and the beach; sailing, a sunset on the beach and the golden glimmering light it sheds on the ocean."

She used orange, gold, and neutrals to create these images and also featured textiles in a tropical, spiral print. Many of the dresses were fitted and floor length, with just enough movement to walk in. A deep cowl neck dress took center stage, one viewer leaving theTent called it "the open heart surgery dress," indeed referring to it's wear-ability by only the most daring woman.

Jewelry was made by Magdalena Stokalska, featuring turquoise, beaded necklaces and dangling earrings. Makeup was kept simple and hair was up in elegantly twisted buns.

Posted by Jennifer Ortakales at 11:39 AM No comments: 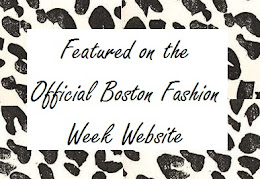 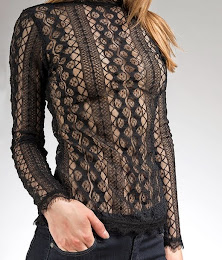 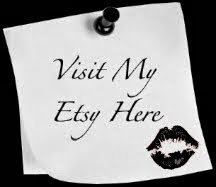